How Philanthropy Advances Innovation and Care

Technology has the power to change the face of medicine. New instruments and devices allow doctors to be more precise, make faster and more accurate diagnoses, and collaborate with colleagues across the country and around the world. In the hands of a gifted physician, innovative new technologies can even save lives. But technology advances rapidly, and staying on the leading edge is costly—and patients deserve the very best. Fortunately, that's where philanthropy comes in.

Lung cancer is one of the most common cancers—more than 200,000 Americans will be diagnosed this year. Centers for Disease Control and Prevention statistics indicate that more people die from lung cancer than any other cancer.

Diagnosing lung cancer is often challenging. Lungs are like trees, with large branches leading to smaller ones. In some cases, physicians can biopsy potentially malignant lung nodules, using CT-guided needles, but often the risks are high, or the location is challenging.

“CT-guided biopsies work great for nodules that are situated in the periphery of the lung,” says Samir Makani, MD, interventional pulmonologist, Scripps MD Anderson Cancer Center. “But as you push the needle deeper, from the outside of the chest into the lung, you increase the risk of lung collapse or bleeding incrementally.”

This puts clinicians and patients in a difficult situation. A biopsy is the best way to determine whether a nodule is malignant; however, in many cases, needle biopsy is just too risky.

Now an emerging technology called robotic bronchoscopy can delve into even the smallest branches to retrieve tissue samples. Instead of coming from outside the chest, a bronchoscope is advanced through the throat into the lungs—a much less invasive approach.

“Coming at it from the inside, via bronchoscopy, decreases the risk of lung collapse or bleeding to less than five percent,” Dr. Makani says. “We can get culture data or pieces of tissue to check for cancer and other diagnoses. It can be more comprehensive and safer in many situations."

Robotic bronchoscopy advances lung diagnostic and can discover cancers earlier, improving outcomes. We can get culture data or pieces of tissue to check for cancer and other diagnoses. It can be more comprehensive and safer in many situations. 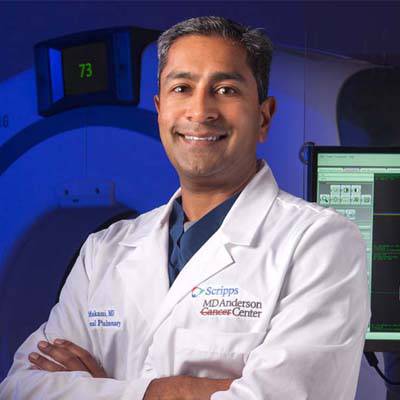 Robotic bronchoscopy is a great addition for patients—a new tool to rule out lung cancer or find it early. Like many advanced technologies at Scripps, it was made possible by philanthropy. In addition, the Harriet E. Pfleger Foundation and the Joan M. Wismer Foundation have provided generous donations to support the lung diagnostic program at Scripps Encinitas.

Pathology is crucial in making cancer diagnoses. Quite often, the pathologist identifies and diagnoses the type of cancer and provides the biomarkers for appropriate treatment. These results are the first data physician committees examine. Oncologists

need detailed pathologic information to make the most informed treatment decisions for patients.

That’s why digital pathology is such an important advancement. The system uses a highly advanced version of a photo scanner. It can read as many as 400 slides in a run, producing three-dimensional images that mimic what pathologists see through a microscope—but they can see it on a big,

“I think it will be significantly better,” says Julie Steele, MD, pathology program director, Scripps MD Anderson, and pathologist, Scripps Clinic. “We won’t have to get the slide manually. We can show another pathologist—not by sending the slide to them (often by courier), but just by telling them to look at their computer. Consultations will be much faster.”

“If a patient has a primary lesion in the colon and an abnormality in the lung, there’s always the question: Is that actual lung cancer or metastasis from the colon cancer?” says Thomas Buchholz, MD, medical director of Scripps MD Anderson and Scripps Clinic radiation oncologist. “That’s where you could do a side-by-side comparison of the two pathologies to see if they are the same cancer or two different types. Each scenario would be treated completely differently.”

Like robotic bronchoscopy, digital pathology offers a platform to build on. In the near future, artificial intelligence could be applied to images, providing an extra layer of analysis to enhance precision care. But again, none of this happens without philanthropy. A generous donation from the E.L. Weigand Foundation funded the digital pathology technology. “Donors really appreciate building a platform that uses big data and artificial intelligence to augment how we’re going to be delivering medical care in the future,” Dr. Buchholz says. “That resonates with people, because they want to contribute to cancer solutions in ways that really change people’s lives.”